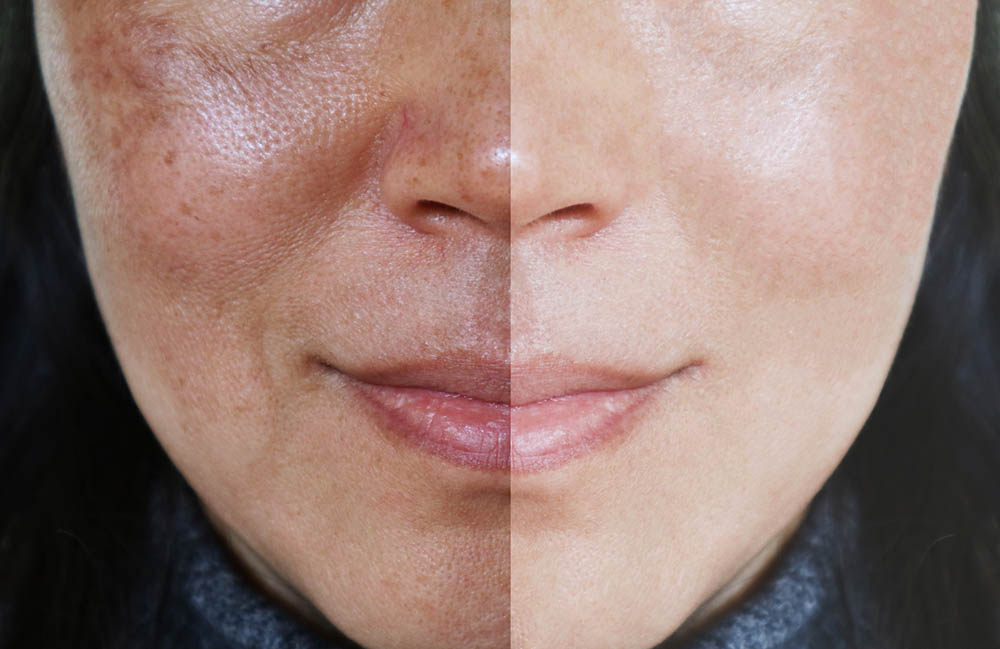 Pigmentation is the coloring of a person’s skin. When a person is healthy, his or her skin color will appear normal. In the case of illness or injury, the person’s skin may change color, becoming darker (hyperpigmentation) or lighter (hypopigmentation).

Hyperpigmentation in skin is caused by an increase in melanin, the substance in the body that is responsible for color (pigment). Certain conditions, such as pregnancy or Addison’s disease (decreased function of the adrenal gland), may cause a greater production of melanin and hyperpigmentation. Exposure to sunlight is a major cause of hyperpigmentaion, and will darken already hyperpigmented areas.

Hyperpigmentation can also be caused by various drugs, including some antibiotics, antiarrhythmics, and antimalarial drugs.

An example of hyperpigmentation is melasma. This condition is characterized by tan or brown patches, most commonly on the face. Melasma can occur in pregnant women and is often called the “mask of pregnancy;” however, men can also develop this condition. Melasma sometimes goes away after pregnancy. It can also be treated with certain prescription creams (such as hydroquinone).

If you have melasma, try to limit your exposure to daylight. Wear a broad-brimmed hat and use a sunscreen with an SPF of 30 or higher at all times, because sunlight will worsen your condition. Sunscreens containing the physical blockers zinc oxide or titanium dioxide are also helpful in blocking daylight’s UVA rays, which makes hyperpigmentation worse.

Consult with your doctor before treating the condition yourself.

The Best Ingredients for Treating Hyperpigmentation

Mandelic acid is a type of alpha-hydroxy acid (AHA) that’s made from almonds. It’s often used in combination with other ingredients as an anti-aging treatment for wrinkles and uneven skin tone. This acid may also be used to treat inflammatory acne.

Mandelic acid is a go-to anti-aging ingredient in the world of skin care. It works to accelerate cell turnover by dissolving the tiny bonds that hold skin cells together, helping to remove dead skin on the surface of the skin that can lead to dull complexions as well as fine lines. It also strengthens collagen, one of the building blocks of the skin’s support network that gives it youthful firmness.

Mandelic acid has been shown to reduce melasma by as much as 50% in four weeks, resulting in a more evenly colored complexion and an example of its excellence in correcting skin tones. Those with deeply pigmented skin often have problems using alpha hydroxy acids because of the irritation they cause. This irritation can stimulate pigment-producing cells to produce more melanin, especially amongst darker complexions. This seems to be less of a problem with mandelic acid than with other alpha hydroxy acids.

It’s common in acid peels and because of its gentle properties, is also safe for those with rosacea.

Arbutin is a natural derivative of the bearberry plant also known as nature’s gentler hydroquinone, an over-the-counter or prescription bleaching agent used for skin lightening.

“Arbutin is similar to hydroquinone in that it blocks the enzymes in your skin that controls melanin production, but it does so without being harsh on the skin, it essentially limits the production of extra melanin (brown pigment) in your skin to produce a brighter, more even skin tone.”

Arbutin is safe for all skin types and is an especially great option for anyone concerned about ochronosis. This is a rare depigmenting effect that’s caused by overuse of hydroquinone.

Chemical exfoliants, or ingredients that loosen dead skin cells with acids, are typically derived from fruits and vegetables. Kojic acid is one we don’t talk about enough. It’s a natural byproduct created during the fermentation of sake (rice wine) and when applied topically, locks melanin (brown pigment) production for a clear, even-tone appearance.

It’s named after the Japanese “koji” fungi used to make it. And it’s also a powerful antioxidant with anti-aging and collagen-protective effects.

“Kojic acid can be used safely by any skin type. Since it’s also a strong antioxidant, we recommend kojic acid for anyone exposed to UV damage, pollution or any other external sources of oxidation, It’s great for big city dwellers, but will benefit anyone with hyperpigmentation or blotchy skin tones.”

OK, so you now know about kojic acid, and perhaps you’ve heard arbutin name-dropped in your dermatologist’s office, but we can guarantee tranexamic acid is the best skin brightener you’ve never heard of.

Tranexamic Acid is a form of an amino acid (protein fragment) called lysine and was originally used as an oral blood-clotting medication. So how did it end up being used in skin-care products? Researchers noticed that it carried a weird side effect: It actually improved the appearance of melasma (hormonal skin darkening) too.

“Based on this, scientists decided to examine what tranexamic acid does to the skin when applied topically, directly to areas of hyperpigmentation. The rest is history, it’s a great skin brightener with a high safety profile, and it’s one of the few ingredients recommended for melasma. It also improves skin roughness and damage caused by UVA/UVB, pollution and other environmental factors.”

Tranexamic acid can be used by anyone, but given the fact that melasma is the most difficult form of hyperpigmentation to treat, this is a major breakthrough.

The great news is that generally, there are no dangerous side effects to using any of these ingredients. However, cocktailing with complementary skin-savers is a must.

“Skin brighteners always work better and faster in combination with AHAs like azelaic acid and mandelic acid, which are in some of our cleansers, skin brighteners such as arbutin block melanin production, but you won’t see the results until the surface layer of your skin turns over.”

At the same time, it’s extremely important to have a dedicated sun-protection plan. “Melanin has a function in your skin: It protects from UV damage. When you reduce your melanin production with skin brighteners, your skin can become more vulnerable to UV exposure, so it’s wise to use SPF constantly.”

This could take 30 to 60 days, depending on your age. When you apply AHAs, this renewal period is expedited, and you’ll see brighter skin more quickly than if you just use something like arbutin alone.

As noted before, remember that results don’t happen overnight. Since our skin turns over about every 28 days, depending on your age and health, it could take a few cycles of cellular turnover before seeing results since pigmentation tends to extend deep into the skin.

Whether you’re using our products or other brands with these ingredients, we recommends using them consistently for at least three months before deciding whether to continue. Obviously, the longer you stick with it, the better your results will be.